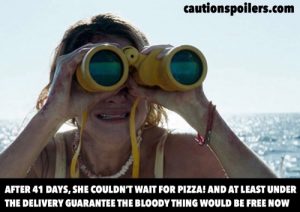 I’ll say straight off that Shailene Woodley is terrific in Adrift. She shines as real-life sailor Tami Oldham – determined yet full of self-doubt, footloose yet bound to one person – marooned on a drifting boat in the Pacific in the early 1980s.

I’m also going to say straight off that I’m going to spoiler the twist (though not until the end); but just like mother nature with a red morning sky, I’m giving you fair warning.

Despite Woodley’s sterling performance, there were times I felt I’d been watching this as long as the 40+ days she’s lost at sea. And I groaned – though not as noisily as the creaking, leaking boat – when she said there were still over 600 miles to go before they reached safety in Hawaii.

Ah, the sea. Delirium, hallucinations, permanent hunger and constant soakings – and that’s when it’s all going to plan. These are the ways Richard (Sam Clafin), a hugely experienced sailor and 10 years older that the 23 year old Tami, describes solo sailing to her. It sounds almost religious, such suffering to be enjoyably endured for the chance to sail over the horizon.

They meet on Tahiti in 1983. She’s a wanderer not a sailor (she sails, but she doesn’t think it makes her a sailor). His mother is dead, and he’s been sailing his own boat for years. Soon they’re agreeing to sail the Hosanna, a relatively luxurious boat owned by Richard’s friends, to California – planning to fly back later to continue their travels.

The film starts with a bold move – as Tami wakes up in her yellow waterproofs below deck, the water rising. Her head is bloodied, the sail is gone, the radio doesn’t work. And she can’t find Richard, just the rope he had been attached to when he had sent her downstairs to relative safety as they tried to sail through a hurricane.

These first few scenes are very stop-start, realistically so, as Tami expends all her mental and physical energy facing some sudden terror before resting, either from exhaustion or paralysed by fear and pain.

She’s certainly resourceful, and often has to rise above her own deflated hopes as her survival takes two steps forward and one and a half back. Soon she spies Richard in the sea, clinging to their upturned dinghy. He’s got a shattered leg, and broken ribs, but he’s alive, as she drags him through the water and up the ladder onto the deck.

Despite the fact I’ve never been on a boat small enough not to have a bar, there were still moments of relatability. Who hasn’t done that orgasmic face thing when spooning peanut butter into one’s mouth from a newly-opened jar?

Though obviously being a mum I worried constantly for them about sunburn; and as they drift Tami becomes more dehydrated, her lips scabbing, her hair parched.

The deck becomes more cluttered as she gradually works through the detritus down below, saving what they can use, from beer to sardines. But they’re way off course, with a 1500 square mile search area.

There are lots of shots of the plucky little boat alone on the big sea, in good weather and bad, grey skies and brilliant sunsets. It’s beautiful even as the waves rage above them. But there is also a terrific scene as they flashback to the storm itself that really shows the power of nature.

It’s shot from the back of the Hosanna, as it’s propelled so fast into the huge waves I thought it was a speedboat rushing to rescue them. The storm itself looks devastating, with huge rolling waves looming over them.

Though more affecting is the rising sense first of worry then cold fear then sheer terror, as they struggle to ground themselves in the practicalities of sailing, in case it might yet save them.

The flashbacks include the earlier part of their voyage on the Hosanna, and at times it’s hard to work out if a scene is set before or after the storm; I kept having to look for general grubbiness for clarification.

Clafin doesn’t have a huge amount to do, beyond lie on some cushions and look agonised when she tries to change the dressing on his leg (actually the biggest “urgh” factor in the film). He’s always good value though, and makes the most of what is very much a supporting and supportive role.

Their flashback romance is picture-perfect but believable, and they do acknowledge that the voyage will be the only way they can really test if they are meant to be together. Up until then their location, and oodles of free time, means their relationship has been idyllic; beach cooking on fires at nightfall, wandering through markets buying exotic flowers.

Before watching I had no idea who, if anyone, lived, which at least made it more tense; if it were possible to un-Google I’d suggest anyone aware of the true story did so before watching. Yet it doesn’t fully work. I wasn’t particularly engaged with the couple, or the story. Maybe I’ve seen too many sea survival stories, as I desperately try to live through other people’s exciting lives (if there’s one thing I realised, as Tami explained her post-high school journey, it was how dull my own has been by comparison).

Still, despite the occasional boredom, this isn’t a bad film. I like watching women survive disasters, big and small; it seems primal, rather than a case of hubris putting them in direct conflict with nature (I also don’t believe nature has a plan).

Tami is a true, lone survivor – remember Richard telling her about at-sea hallucinations? He never did make it out of the water, or cling for hours half-conscious to their upturned dingy. Tami never did pull him to safety.

Is her fight any less epic than, say, the climbers in director Baltasar Kormákur’s earlier film Everest? Or the upcoming (apparently, though it’s gone a bit quiet) film about explorer Ernest Shackleton, who in 1916 spent two months camped on Antarctic ice floes with his crew before sailing in their lifeboats over 700 nautical miles to safety?

I don’t think so. And stories like this always make me wonder about the almost-survivors, brave women and men who may have had the skill but not the luck (or the modern equipment) of those who made it.

In some ways Tami’s survival could be seen as a tribute to them as much as to the real-life woman’s indomitable and resourceful mind and body.