You are here: Home / Film Reviews / A Ghost Story 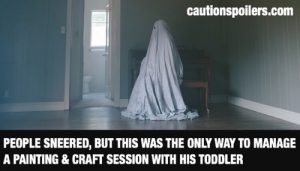 At the start of A Ghost Story, Casey Affleck is a dead man walking, and not just because we know he is going to die – wraithlike smoke and mist drift across the screen, half-forming into figures.

Which rather feels as if a joke is being played on us, as once he does die, his ghost is actually a remarkably solid presence, surrounded by a ramshackle reality, trapped in a crumbling wooden house while life goes on around him and away from him.

One morning he is killed in a car accident outside the home he shares with his partner (played by Rooney Mara – neither character is given a name). Lying dead in hospital, he gets up, still covered in the vast white sheet, and wanders through the corridors. There is a bright light that opens up, but instead of going towards it he simply walks home. Where he stays, a looming but unseen and mostly unfelt presence, as she comes to terms with her grief.

His relationship with Mara was already fraught. She wanted them to move out of the house, he wanted to stay because of history, but it turns out he was often absent anyway, leaving her there alone. So when he returns as a ghost it is as if karma rather than the supernatural has condemned him to remain in that small prison for all eternity.

The film is uncomfortable to watch as he’s basically watching people while unseen himself. At one point Mara comes home to find a friend has left a home-baked pie. Sitting on the floor, she methodically eats the whole thing. This is the kind of action you only ever do alone – whether because of grief, or emotional eating, or something else. It’s not the same as snuggling down with your best mate for a gossip as you devour a whole cheesecake on one plate with two spoons. Yet there he stands, in the corner, watching her. I found it hugely troubling – at one point my foot was silently tapping thin air in agitation. Later he terrifies a young family who’ve moved in, and though his desperation is understandable it’s still horrible to watch people being watched.

But Mara moves on with her life (over what timespan we don’t know) and moves out, though not before kissing another man on her doorstep. When she goes she leaves a note tucked into a crack in the wall, which it becomes the ghost’s mission to retrieve. Other people move in, while he watches silently and then not so silently as frustration and anger start to boil over. He also communicates with another ghost in a nearby house (the most tragic figure in the whole film), who sits silently at a window, swathed in a floral sheet, waiting for someone – heartbreakingly she’s forgotten who.

The first half of the movie is incredibly quiet, which is strange considering his job before he dies is something to do with music. New people moving in means more noise, and this corresponds with his growing ability to bluntly affect physical objects. There’s a pivotal scene about halfway through when a drunk man at a party gives a monologue about the futility of existence versus the emotional and artistic links we build between different generations across time. I didn’t particularly enjoy this scene – maybe I’ve seen too many inebriated men holding forth on basic philosophical ideas – though it’s interesting that it’s this which seems to make the ghost stop and think (if he can think). It is also what allows the film to move forwards and backwards through time, making it more than just a study in loss and loneliness but also a journey for him.

A Ghost Story is not frightening and it’s not a horror film, though psychologically it is quite horrific if you put yourself in the position of the house’s inhabitants who are unaware of his presence as he watches them. His own existence is probably terrifying to him too, though we don’t actually know if a ghost can feel the fear, loneliness and boredom we impose on him.

It is certainly one of those rare films that stays with you. It raises questions about links with the past and future, how we are remembered, and whether our individual and collective memories are eventually worth anything. And despite the party monologue, Lowery seems to be saying yes they are. (Trust me, kids, as you age these questions will pop unbidden into your minds more and more frequently.) And there’s also the morality of the watchfulness – his and ours, as this story is created by us from the bare bones of a structure.

The cinematography and sets have to work incredibly hard. The house is fracturing and fragile, while the ghost is extraordinarily imposing on every scene. Affleck’s costume is far bigger than a sheet would be. In fact he looks to be swathed in several sheets which get gradually grubbier as the years go by – an interesting change as no one else can see them even though they’re physical objects. And the eyeholes are perfectly cut out to convey sadness.

Mara is very much a casually-dressed everywoman in her dark jeans, long sleeved jersey tops and sneakers, longish dark hair often half tied up. She is wonderful as a woman in a relationship that is by no means perfect who has to learn to live with that loss, and you wonder if their relationship would ever have gone the distance had he lived. She only appears in half the film though, and is unexpectedly forgettable as the story moves on.

Affleck is extraordinary. When deliberately used as a tool, silence is very powerful – here it is frustrating for the ghost, but it’s astonishing how much Affleck conveys without speaking, his face covered. His is not a character I warmed to at any stage, but even I’m not completely dead inside and as well as his anger and frustration, his incredible loneliness loomed as large for me as he did.

Having said that, he’s also literally a blank sheet and because of this, his ending (and that of the other ghost) can be seen as something sudden and nihilistic or something warm and meaningful, depending on our own feelings about death. As at the end of the day we still have no real idea what happens to us at the end of our lives.

buy / rent A Ghost Story on amazon video, or buy on dvd or blu-ray from amazon uk

buy / rent A Ghost Story on amazon video from amazon.com

buy A Ghost Story on dvd or Blu-ray from amazon.com