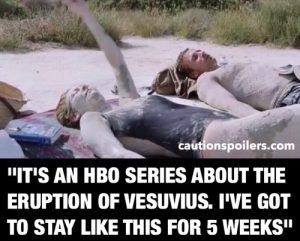 The buzz around this film promised so much but like the worst kind of lover, it over-commits and under-delivers. It’s 2 hours long when it should be 90 minutes, and by the end even the regulation nudity and shagging can’t stop you looking at your watch.

And frankly my spending £10 for two hours of rich attractive people going on and on about themselves and their problems seems wasteful when I could have done that with my frenemies for free.

Having said that, the cast are all brilliant – especially Ralph Fiennes who is rather too good as a supremely irritating ex-druggy record producer crossed with everyone’s embarrassing dancing dad.

Being continental, everyone gets naked but no one looks perfect. They’ve all got cellulite, stubbly armpits and trashy make up. Except for Tilda Swinton who looks incredible all the way through (it’s actually worth seeing just for her outfits when they all go into town and therefore have to put some clothes on). When they’re not naked they all wear really big knickers.

Marianne, an androgynous superstar singer, is silently recuperating from a throat operation on the Italian island of Panterellia with her partner Paul (Matthias Schoenaerts). Paul has his own emotional demons to tackle.

Upsetting the relaxed, very naked poolside ambience is Harry (Fiennes, or more accurately the Fiennes appendage) who turns up at the airport with his newly-discovered 22 year old American daughter Penelope (Johnson). Harry is Marianne’s ex-boyfriend and despite his irritatingness there’s obviously something there that still grabs her.

For the next 90 minutes they relax by the pool, argue, shop for groceries, reminisce about old times and try not to have sex with the wrong people. It’s a bit like a 20-year university reunion only with perter breasts and without any arguments about which was the best Stone Roses album.

Pen makes an embarrassingly obvious play for Paul, with her finest moment being an offer to show him her handstand in the pool then stripping naked at a secluded beach when she has finally persuaded him to show her around.

Meanwhile Harry and Marianne go into town together, get back, sort of half have sex, cook a nice dinner and await the other two’s very late return (who got lost apparently. God I so remember being an irritating 22 year old in little floral dresses and big boots). The resulting dinner table is of course a seething mess of innuendo, lustful glances, a gecko, lots of pasta and cilantro (that’s coriander, British people) until Pen at last takes her youthful boobs off to bed.

Eventually only Harry (oh god he’s naked again! Put it away Harry, you’ll always be Voldemort to us) and Paul are left by the pool and everything goes hideously wrong. It’s all rather unexpected after the previous self-obsessed pointless chatter (or in Marianne’s case hoarse whisper, nods and head tilts). Having expected nothing much to happen beyond endless self-examination, suddenly something does happen and it’s shocking.

There follows some typically laid back Italian police crime scene management and a few rather childish surprises. Nothing really gets resolved regarding the crime although all potential victims and perpetrators are so annoying that doesn’t really matter.

Oh and the weather changes to torrential rain and the music goes all clangy. Just so you know the good times are over.

I’m not sure what this film is meant to be about – it has elements of a crime thriller by the end, though for most of the running time it’s about managing relationships among disruption. The different intrusions into Paul and Marianne’s recovery could have been more interestingly dealt with. The migrant crisis is only touched upon when it could have made a fascinating counterweight to the goings on at the villa.

And Pen, who is the real disruptive influence here (you feel Paul and Marianne would have worked out a way to manage Harry as he’s a known quantity to them) is simply too unsophisticated to create an upset that’s actually arresting. She’s that stage of life where she only needs to rely on her youth and sex appeal to cause a furore, which makes her machinations too obvious. It’s rather embarrassing how easily Paul falls for them, and while that could be the point (it’s hardly uncommon, and Paul’s mental health already seems fragile) she doesn’t really add any depth.

Luckily the top-notch cast means it’s still worth watching. Despite the stiff competition Fiennes yet again still steals the show, even up against an almost-silent Swinton. He’s a continual scene-stealer though actually it’s worth seeing A Bigger Splash simply for him dancing. Overall, though, the film itself doesn’t go anywhere.

An astonishingly good cast, and beautiful scenery; yet it doesn’t quite work (unless they were trying to make a film about the world’s most irritating navelgazers in which case bravo, here, have five stars).

We did, though, come out of the cinema wanting to batch cook spaghetti bolognaise and book an Italian mini break so it’s not all bad.

Watch the trailer for A Bigger Splash: