You are here: Home / Film News / Den’s After Diamonds in Den Of Thieves 2 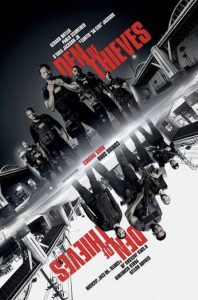 There’s going to be a Den Of Thieves sequel and I couldn’t be more excited (apart from for John Wick: Chapter 3, obviously).

And I have SO many questions:

– Will they push those Robin Hood puns as far as they can go, even though <SPOILER!> poor old Ray Merrimen is no more?

– Will the producers have finally decided if Big Nick’s surname is Flanagan or O’Brien?

– After screwing over the impossible-to-enter LA Federal Reserve last time, where else could they go, apart from maybe attempting the jar of strawberry jam in my cupboard that is resisting all attempts at entry, including the rubber gloves and elastic band trick*?

Hopefully in Den Of Thieves 2 Big Nick won’t have turned into a virtuous, vaping, vegan, born-again virgin, and will still be smoking, drinking, fighting, eating donuts, and shagging strippers. As let’s face it, it’s no fun going to the cinema and feeling like YOU’RE the bad guy. I can get that at home.

What we do know is that the sequel is likely to follow Big Nick and his enormous forearms to Europe, on the trail of Donnie, who is planning a massive diamond heist.

Christian Gudegast, who wrote and directed the first film, is coming back, as is Gerard Butler, who is also producing again. O’Shea Jackson is also likely to return.

The first film is still in cinemas and is performing above expectations.

*I know this sounds like something Big Nick would do with one of his ladeez but it really isn’t, it’s been 18 months now and I just want some breakfast.

If you haven’t seen it, check out my Den Of Thieves review here or the first and second trailers.