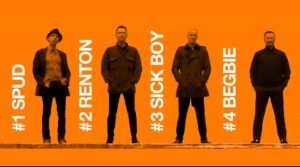 Oh come on, I’ve got two small boys and I’ve spent the last seven years of bedtimes pretending to be Thomas The Bloody Tank Engine, a celebratory “whoo woo!” is the least you should expect. Anyway are you singing “Born Slippy” by Underworld under your breath yet?

For people old enough to remember the first Trainspotting movie, which came out back in – ahem – 1996 you’re probably wetting your pants right now (BECAUSE OF EXCITEMENT! JEEZ WE’RE NOT THAT OLD.)

See the Trainspotting 2 trailer below.