“How far are we allowed to go, to fix something that’s broken?” asks Dr Michael Morbius of his mentor, played by Jared Harris. “Until the remedy is worse than the disease”, he replies.

Jared Leto is the Marvel villain, in the longest teaser trailer I’ve ever seen. It’s a welcome change from some of the blink-and-you-miss-it tiny teasers and even trailer announcements that I’ve seen recently.

Admittedly there are lots of long pauses which ups the length a bit, but there’s also a lot going on, and plenty of exposition if like me you don’t know much about the medic-turned-vampire. 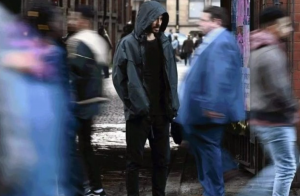 Before this trailer, I didn’t know anything about Morbius beyond that he’s a doctor afflicted by a rare and fatal blood disease whose self-administered cure turns him into a blood-drinking monster.  (What do you mean, did I have to google all that?*)

Leto looks devilishly messianic, as Morbius’s self-treatment turns him into a super-fast, super-strong vampire possessing a great affinity with bats, finding his way around the same way they do: yes, echolocation, or sound waves. (Nil points if you just shouted out “BAT MOBILE!”)

Sony, who made Venom, Spider-Man: Homecoming and Spider-Man: Far From Home, are distributing, in association with Marvel Entertainment (Morbius walks past a Spider-Man poster defaced with MURDERER during the trailer).

The film is out in the UK and US on 31 July 2020. It’s directed by Daniel Espinosa, and also stars second-best Doctor, Matt “fezes are cool” Smith as Loxias Crown, Morbius’s friend who has the same blood disease; Tyrese Gibson as FBI agent Simon Stroud, who is hunting Morbius; and Adria Arjona as Martine Bancroft, Morbius’s fiancée.

Michael Keaton (Vulture in Spider-Man: Homecoming) appears at the very end of the trailer.