You are here: Home / Trailers / Unsane Trailer Will Make U Doubt Everythung 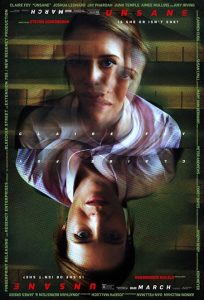 “Do you know how many calls the cops get like that every week?” asks Scary Nurse at the psychiatric hospital when Sawyer Valentini, kept there against her will, phones the police to ask for help. “Those are from crazy people…” Sawyer replies.

The trailer for Steven Soderbergh’s new film is so terrifying I’m not sure I can actually sit through the actual movie, unless they let me watch it backwards so I can find out what happens at the end at the start, and leave if there’s no happy ending for Sawyer.

Starring Claire Foy as Valentini, she’s a victim of stalking and has already changed her number and moved cities. She still sees the bearded man everywhere though, or is it her imagination?

Tricked into signing her own submission to a psychiatric hospital, once there Sawyer has to face her stalker every day, who could be real or could be in her head.

Frankly either option is bloody terrifying.

Soderbergh shot the film on a iPhone. I’m guessing not like you or I would film on an iPhone, but with proper lighting and sound and make-up artists and, you know, actors – rather than my children having farting competitions or the dog trying to say “sausages” so I can upload it to Facebook in direct competition with my frenemies’ skiing holiday pictures.

By the way has anyone ever shot a movie on an Android phone? Millennials, why aren’t you on to this? That’s your job!

Check out the terrifying trailer and scourge of autocorrects everywhere below.