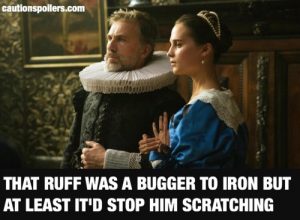 …in which case gather round that conference table, order in a “working lunch” and get the big screen up.

I’m a week late with this red band Tulip Fever trailer but I’m not too worried as the film is about THREE YEARS late, having been lying around, not unlike the couple in the film, without much on. But its origins go back even further – an initial attempt to film it was made back in 2004.

Based on Deborah Moggach’s book of the same name, Tulip Fever is set in 17th century Netherlands and tells the story of Sophia (Alicia Vikander), the young wife of the much older Cornelis (Christoph Waltz). He commissions a portrait from young artist Jan Van Loos (Dane DeHaan) but artist and model fall in love. They then decide to get involved with the tulip market in an effort to make some money and so find a way to be together.

I first heard about tulip fever, or mania, back in 2000, at the time of the first dotcom crash. Ah yes – those heady days fuelled by free fruit and office massages, bouncing on brightly coloured beanbags while working for tiny companies apparently worth millions. Then a few weeks later we were unemployed and wondering how anyone expected a company to survive with no business plan and why hadn’t anybody important noticed in time.

Many of us then picked up a 19th century book which had suddenly got very popular – Charles Mackay’s Extraordinary Popular Delusions And The Madness of Crowds. Covering tulip mania and the South Sea Bubble, these chapters are warnings from the past about talked-up markets with no solid foundations, and also against the future internet hive mind. Yes, sometimes it really is better to copy Monty Python and all be individuals.

I can’t remember if I ever read Deborah Moggach’s book when it came out so I don’t know how faithful the adaptation is to the novel (nor do I really care. They could film the New Testament and give it a different ending and I’d still watch it, as long as they kept it to a pacy 98 minutes).

Buzz on Tulip Fever is, to put it nicely, mixed. But the trailer looks lovely. Alicia Vikander also looks lovely, whether in her pretty blue portrait dress or naked, which is how she spends a good deal of the trailer.

I’ve also no idea whether they’ve put all the attractive nudity into one trailer or whether she really does spend most of the film like that. Whatever, what I want most from Tulip Fever is the blue dress Vikander wears when she is wearing something.