You are here: Home / Trailers / Trailer: The Last Tree – identity and belonging, from rural Lincolnshire to inner London 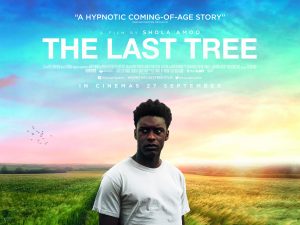 Shola Amoo’s second feature, the semi-autobiographical The Last Tree, is an accomplished, absorbing and witty film about Femi (Sam Adewumni), a Black teenage boy struggling to create his own identity and sense of place from disparate memories, experiences and expectations.

I was lucky enough to see it at Sundance London; you can read my 4-star review of the film here.

THE LAST TREE is the semi-autobiographical story of Femi (as a child played by newcomer Tai Golding), a British boy of Nigerian heritage who, after being fostered in rural Lincolnshire, moves to inner-city London to live with his birth mother. In his teens, Femi (Sam Adewunmi) is struggling with the culture and values of his new environment. Femi must decide which path to adulthood he wants to take, and what it means to be a young Black man in London during the early 00s.

Director Shola Amoo (A Moving Image) blends aesthetics and tones beyond a conventional drama to present a modern, unique focus on youth and identity. An authentic spotlight on London at the turn of the millennium, THE LAST TREE evocatively explores the subject of belonging in a fresh and poetic way. Featuring a range of standout performances from a talented cast, including Sam Adewunmi in the lead role, this beautifully shot and stunningly directed film is quite simply unmissable.

I can confirm that Adewunmi is a captivating and charismatic lead. His maturity as an actor belies his youth: it’s not just that he reminds us that Femi is, after all, still a kid; Adewumni ensures that in the older teen we can still clearly see the young Femi too.

The Last Tree is out in UK and Ireland cinemas on 27 September 2019. It also stars Gbemisola Ikumelo, Denise Black and Nicholas Pinnock.

Watch the trailer for The Last Tree below: