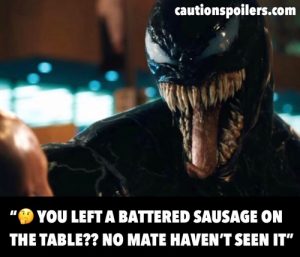 The new trailer for Venom is out, though probably best not to watch if you’re a germ-obsessed lickophobe. (Otherwise grab your hand sanitiser and check it out below, along with the first trailer in case you missed it.)

Venom stars Tom Hardy as journalist Eddie Brock, who is infected with a symbiote. It’s a creature very keen on teamwork: “WE are Venom” it states.

Venom is also rather a poet, telling one man that once “we” have ripped off his arms, legs and head he will be “rolling down the street… like a turd in the wind”. Which is the kind of thing my poo-obsessed 6 year old would come out with if I let him listen to Bob Dylan.

Venom possesses a smile even scarier than the Alien Queen and Pennywise combined, with more teeth than a Hollywood actor and an enormous tongue so disgusting that it could only be improved if he ate a blue Mr Bubble ice lolly.

Brock appears to be seduced by what he can be: ‘That power, it’s not completely awful” he comments, though to be fair he does his best to share general human good practice with the symbiote when it comes to not killing everybody. 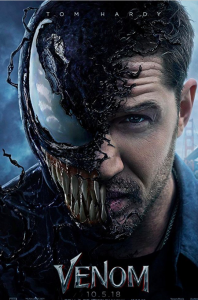 I don’t read comics so I have no idea if the trailer/film is true to the character’s history, though it all looks enjoyably bonkers to me.

The film is released on 5 October in the US and in the UK. It stars Tom Hardy as Eddie Brock / Venom, Michelle Williams as Anne Weying, district attorney and girlfriend of Eddie, and Riz Ahmed as inventor and head of the Life Foundation, Carlton Drake. It is directed by Ruben Fletcher.

And here’s the first Venom trailer, in case you missed it: