You are here: Home / Trailers / Sssssss….. I mean shhhh! All quiet for the “Them That Follow” trailer 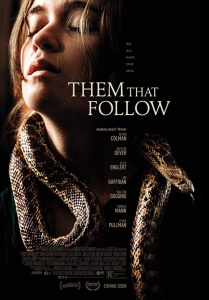 Snakes and God feature heavily in this trailer, so if you suffer from ophiophobia or theophobia maybe give this one a miss (but remember those terms for your next pub quiz).

The trailer for this tale of god-fearing, snake-rearing folk (below) feels slow-moving but creepy, with closed doors and an increasingly scared young woman, plus Olivia Colman smoking a cigarette with a zzzzzzssssssss which is way more foreboding than any serpent: “When the devil creeps in, you need someone to see the truth, even when you don’t”.

Deep in Appalachia, Pastor Lemuel Childs (Walton Goggins) presides over an isolated community of serpent handlers, an obscure sect of Pentecostals who willingly take up venomous snakes to prove themselves before God. As his devoted daughter, Mara (Alice Englert) prepares for her wedding day, under the watchful eye of Hope Slaughter (Academy Award Winner Olivia Colman), a dangerous secret is unearthed and she is forced to confront the deadly tradition of her father’s church.

Them That Follow was written and directed by Britt Poulton and Dan Madison Savage, and is a first feature for both of them. It also stars Kaitlyn Dever (currently starring in Booksmart), Alice Englert, Jim Gaffigan, Thomas Mann and Lewis Pullman.

After premiering at the Sundance Film Festival in January, Them That Follow was picked up by Orchard Film Group for US distribution – it’s being released there on 2 August and is out in the UK on 22 November 2019.