You are here: Home / Trailers / The Aftermath: can everything be rebuilt? Trailer, interviews and featurettes 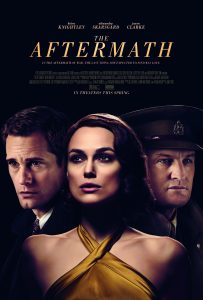 The film, directed by James Kent, is about reconciliation – rebuilding broken relationships as much as broken cities, and the ambiguities of war that are thrown up, particularly afterwards.

It stars Keira Knightley, who I love, though I’m looking forward to the day she takes a role in a sci-fi movie set in deep space where she has to wear a silverfoil spacesuit and a comfy mom bra underneath.

In The Aftermath she’s in 1940s twinsets and pearls, neat coats and some gorgeous slinky evening wear – the clothes are of course stunning.

One velvet dress in particular is so elegant I’m not surprised she didn’t want to take it off when going at it hammer and tongs on her dining room table with her German lover.

I say “her” dining room table, Knightley’s character in The Aftermath, Rachael Morgan, is living in someone else’s house – after the Allies requisitioned it from its widowed German architect owner, Stefan Lubert (Alexander Skarsgård), living there with his teenage daughter.

They’re in Hamburg in 1946, and Rachel’s British army colonel husband Lewis (Jason Clarke) has been posted there to help with the post-war rebuilding.

But local people are increasingly angry at their treatment by the Allies, and the Nazis hidden in their midst are not going to give up easily.

I watched it today so my review was coming soon…

Check out the trailer below, and scroll down for cast interviews, featurettes and images:

Fact to fiction – The Aftermath featurette: