You are here: Home / Trailers / Terminator: Dark Fate – everyone’s favourite Sarah* is BACK 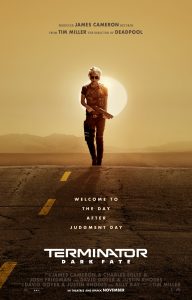 Set over 20 years after Terminator 2: Judgement Day, this new film is a direct sequel – with the later Terminator films seen as taking place in alternate timelines.

This time Mackenzie Davis’s cyborg Grace is trying to protect a young woman, Dani Ramos (Natalia Reyes) from a Rev-9 – a liquid metal Terminator (Gabriel Luna), which is sent from the future to kill her.

Arnold Schwarzenegger and Linda Hamilton are both back in this new instalment, which is directed by Tim Miller and has James Cameron as co-weriter and producer.

The film is released in the UK on 23 October and the US on 1 November.

Watch the trailers below, and scroll down for a featurette about the film.