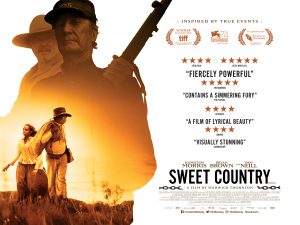 A tale of death and racism in 1920s Australia, Sweet Country is a gut-wrenching but brilliant and gripping film set amid an arid but beautiful landscape, from director Warwick Thornton (Samson And Delilah).

Forced to kill Harry in self-defence, Sam then has to go on the run with his wife Lizzie for killing a white man, while local Police Sergeant Fletcher (Bryan Brown), starts a manhunt to bring him in. The law seems to be on Sam’s side, but will justice be served?

Sweet Country is released in the UK on 9 March 2018 – my review should be up that week (did I tell you it’s a brilliant film?)