You are here: Home / Trailers / TRAILER Star Wars: The Rise Of Skywalker 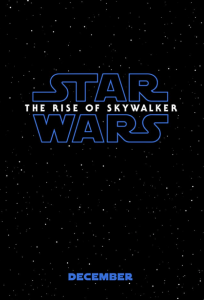 Every generation has a legend…

The title and teaser trailer were unveiled at the Star Wars Celebration in Chicago – you can see it below, along with film footage from the panel. (For cast and director soundbites from the event click here.)

Carrie Fisher appears – footage of Leia Organa from The Force Awakens was used and scenes written around the film they had.

I love Rey’s backwards leap, something I imagine myself doing whenever I just miss the bus into town on the first day of the John Lewis sale.

I love it, though as for what it all means, you’ll have to work that out among yourselves as my Star Wars knowledge is unfortunately about as comprehensive as Eton.

“We’ll always be with you. No one’s ever really gone.”