You are here: Home / Trailers / Star Wars: The Last Jedi Trailer Is Here In Case You Don’t Want To Watch It 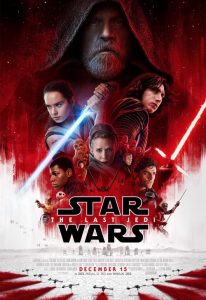 I’m not going to say whether there are spoilers on the new Star Wars: The Last Jedi Trailer, as what makes a spoiler? But I know lots of you are huge fans and will be having an internal battle with your Dark Side as to whether you should watch it or not.

If you want to check out the new trailer, it’s below. If not, click Back now! (If you want something to whet your appetite but no more, then remind yourself of the Star Wars: The Last Jedi teaser trailer from back in April, including the amazing Shoe Island).

I’m not a Star Wars expert. I watch the films when they come out and I enjoy them, I know (roughly) who everyone is, and I’ve seen the “I Am Your Father!” scene from Empire Strikes Back re-enacted several times (possibly inaccurately) thanks to my love of Reign Of Fire.

I may also have spent many hours pondering whether the singular of Jedi is Jedum, only to find out now that it is, in fact, er, Jedi.

But if you questioned me on the difference between an Ewok and a Wookiee, I would come up embarrassingly short. That can be quite helpful though, as watching this trailer, I really didn’t know what was going on (though I enjoyed it), so I’m not convinced it’s that spoilery. It’s more about spectacle (though yes, all the main characters are there) rather than story.

Having said that I genuinely understand the “should I / shouldn’t I” dilemma for those of you who adore the films.

I will be reviewing it when it comes out and feel free to comment then if I’ve got completely the wrong end of the stick (or lightsaber).

Star Wars: The Last Jedi is directed by Ryan Johnson, stars Daisy Ridley, John Boyega, Mark Hamill and Carrie Fisher, and is due to be released on December 15 2017.