You are here: Home / Trailers / Blake Lively steps to her own beat in new trailer for The Rhythm Section 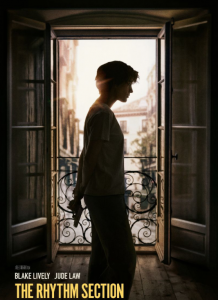 And her wig game is strong as her character Stephanie Patrick seeks both revenge and, ultimately, redemption in this new trailer for upcoming thriller The Rhythm Section.

“Blake Lively stars as Stephanie Patrick, an ordinary woman on a path of self-destruction after her family is tragically killed in a plane crash. When Stephanie discovers that the crash was not an accident, she enters a dark, complex world to seek revenge on those responsible and find her own redemption.”

The trailer shows Stephanie learning how to shoot, specifically Jude Law – the hard part isn’t killing someone, he tells her, it’s living with it afterwards – and tracking down her family’s killers in a variety of wigs.

Based on the novel by Mark Burnell, The Rhythm Section is directed by Reed Morano and also stars Sterling K. Brown.

Watch the trailer now and scroll down for the first full clip and featurette starring Lively in a unique one-shot, adrenaline-fuelled car chase.