You are here: Home / Trailers / Phantastic or soul-destroying? That Ghostbusters Afterlife trailer

Directed by Jason Reitman, Ghostbusters Afterlife looks like an old fashioned adventure movie, filled with kids who get loads of free time without their parents and are also allowed to actually go outside on their own. 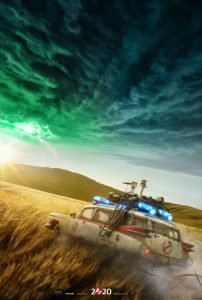 It’s set in the middle of nowhere, so I don’t know how anyone being pursued by a ghost, ghoul or goblin will be able to call anyone for help as required by Ray Parker Jnr, if US countryside mobile signal is anything like ours here.

The special effects will take you right back to 1984, though the trailer is light on comedy – this isn’t going to be like the first films (it’s also a follow on to the first two Ghostbusters movies, with Paul Feig’s HIGHLY ENJOYABLE film from 2016, er, ghosted).

Siblings Trevor (Finn Wolfhard) and Phoebe (Mckenna Grace) have move to a very spooky old house with their mum (Carrie Coon) who is completely broke. Her mysterious father left her the house, and once settled in the family start picking through “the rubble of his life”.

There hasn’t been a ghost sighting in 30 years their new teacher Paul Rudd tells them, and apart from him no one seems to remember the heady, ghoul-filled New York of the 1980s.

But something is afoot: the town starts shaking, an old mine shaft starts spewing glowing green stuff and the kids find a battered old car in the barn with the licence plate ECTO 1…

Ghostbusters Afterlife is out in the UK and US on 10 July 2020. Watch the trailer below: