You are here: Home / Trailers / Peter Rabbit 2: teaser trailer, and with Bea and Thomas married will there soon be a bunny in the oven? 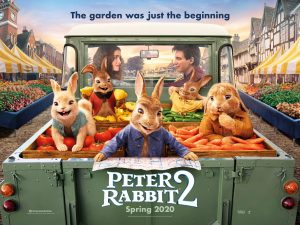 What am I saying – who could eat a rabbit! (Though I’d love to know if after the first film, sales went stratospheric or completely collapsed. What do we Brits love more, animals or pies?)

The first Peter Rabbit film was fine – I even liked James Corden as the titular bunny – though, like a slightly underseasoned stew, I’m not sure it warranted seconds.

Still, that’s what we’re getting. And from their new teaser trailer it looks quite sweet, though with a story sparser than my vegetable patch (that’s not a euphemism, I am indeed a terrible gardener).

Last time the two main issues were the lapses into Australian from some of the cast (this Cumbrian classic was partly filmed Down Under) and such incredibly camera trickery as to make people unfamiliar with our beloved M6 motorway think that you can motorbike the 300 miles from London to the Lake District in about 10 minutes.

I was once stuck in a traffic jam on there, in the middle of nowhere, at MIDNIGHT. I know films aren’t expected to be realistic but there’s Alien and then there’s completely unbelievable. 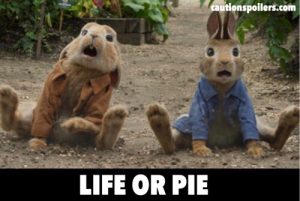 “In Peter Rabbit 2, the lovable rogue is back. Bea, Thomas, and the rabbits have created a makeshift family, but despite his best efforts, Peter can’t seem to shake his mischievous reputation. Adventuring out of the garden, Peter finds himself in a world where his mischief is appreciated, but when his family risks everything to come looking for him, Peter must figure out what kind of bunny he wants to be.”