You are here: Home / Trailers / Our Ladies trailer: unholy terrors hit Edinburgh for freedom and fun without the nuns

After successfully premiering at last October’s London Film Festival, 90s-set comedy Our Ladies – about school friends at a Catholic girls’ school who go on a trip to Edinburgh to take part in a choir competition – now has a trailer, which is both raucous and moving. 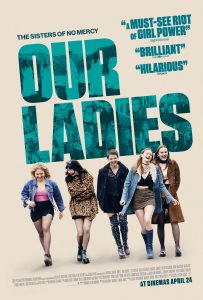 The film is directed by Michael Caton-Jones and adapted by him from Alan Warner’s 80s novel The Sopranos (you can see why they didn’t call the film that).

It’s set in 1996 so expect a soundtrack that’ll be a religious experience itself for people my age. The trailer features Edwyn Collins’ A Girl Like You, and Big Country’s In A Big Country.