You are here: Home / Trailers / New teaser for Spiral: From The Book Of Saw

“Whoever did this has another motive. They’re targeting cops.”

This is not, apparently, a sequel or direct reboot.  Rather, the Saw world is being “re-imagined” with Spiral, as a sadistic killer, targeting the police. Is it a copycat killer?

Spiral had the working title The Organ Donor, and comes from an initial story treatment from Chris Rock who also executively produces (the writers are Josh Stolberg and Pete Goldfinger). 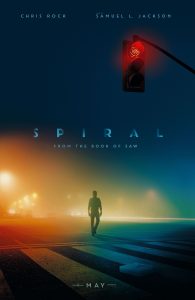 A sadistic mastermind unleashes a twisted form of justice in SPIRAL, the terrifying new chapter from the book of SAW. Working in the shadow of an esteemed police veteran (Samuel L. Jackson), brash Detective Ezekiel “Zeke” Banks (Chris Rock) and his rookie partner (Max Minghella) take charge of a grisly investigation into murders that are eerily reminiscent of the city’s gruesome past. Unwittingly entrapped in a deepening mystery, Zeke finds himself at the center of the killer’s morbid game.

In the trailer Det. Zeke Banks and Det. William Schenke (Minghella) are in a car discussing Schenke’s wife and baby son, before they’re summoned to a situation where there’s an officer down.

There are grisly remains on a subway track, and then a truck with a giant spiral painted on the side (the puppet in the earlier Saw films had red spirals painted on its cheeks). There are more spirals, and a pretty blue box delivery (which I somehow doubt contains something from Tiffany).

And then… we see Zeke handcuffed to a pipe in a tunnel, picking up a saw with his free hand.

Spiral is directed by Darren Lynn Bousman, who directed Saw II, III and IV. It’s released by Lionsgate in the UK and US on 15 May 2020.