You are here: Home / Trailers / NEW Shaun the Sheep: Farmageddon trailer: if you’re not offaly excited you soon wool be 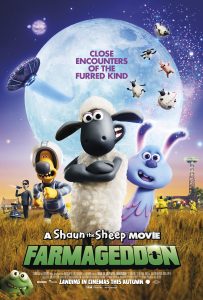 No bleating about my jokes please, my sheep puns are shear genius and ewe know it.

Shaun has a new movie out later this year – full name A Shaun The Sheep Movie: Farmageddon – and here’s the new trailer.

There’s an alien invader landed near Mossy Bottom Farm, extraterrestrial Lu-La, and Shaun takes it upon himself to help the mischievous and magical creature get back to her home planet.

The trailer also features a new track from the film: Lazy, a collaboration between The Vaccines and Kylie Minogue.

Once again Justin Fletcher voices Shaun and Timmy – he may not be a household name around the world (Justin not Shaun) but for most parents over here he’s a national treasure thanks to his children’s TV shows Something Special and Gigglebiz.

British YouTuber and Aardman fan Joe Sugg is also in the film as Pizza Boy. (Sugg was in the UK voice cast for Wonder Park, and he was pretty good, though obviously I had no idea who he was until my children told me.)

The first Shaun The Sheep Movie was a corker, so I’m looking forward to this one. It’s out on 18 October in the UK and 13 December in the US and is directed by Richard Phelan and Will Becher.