You are here: Home / Trailers / Mother Of All Trailers Arrives And I’m More Confused Than Ever 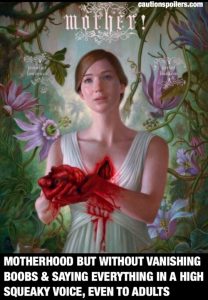 Letting our offspring watch Peppa Pig on an iPad, giving birth to world tyrants, and breastfeeding in public. Just three of the crimes we mothers cop a load of shit for, so I’m really hoping that upcoming psychological horror film mother! doesn’t cast us in an even worse light.

Anyway, mum-rant over (for now! Hahaha). We’ve already had a poster with Lawrence holding her open heart in her hands as an offering but the trailer just sows more confusion.

Starring Jennifer Lawrence and Javier Bardem, and directed by Darren Aronofsky, it looks seriously weird and is therefore a must-watch. Massive-age-gap-couple Lawrence and Bardem live in a lovely recently-renovated house in presumably bliss, until one day a strange man arrives (Ed Harris) who is allowed to stay. Then up pitches Michelle Pfeiffer who claims to be his wife, and everything starts going pear-shaped (except the women obviously). There’s a link between the couple and Bardem’s character as there’s a picture of him in their luggage.

Word is that the huge age gap (she’s literally an ovum, he’s an 837 year old piece of desiccating bone – ok, they look about 25 and 50) is indeed plot-related, and I hope it’s true as otherwise it’s standard-Hollywood-but-ewwww.

I was trying to work out what the film might be about, and all I can come up with are that either Bardem is actually her father, or the couple who come to stay are them, but several decades on. Or maybe it’s a cult lead by a woman, presumably Pfeiffer, who might turn out to be Cult Mother and Lawrence’s Mother. If I’m right, REMEMBER YOU HEARD IT HERE FIRST. And if I am wrong LOOK INTO MY EYES – YOU REMEMBER NOTHING – RIGHT, YOU’RE BACK IN THE ROOM.

The trailer has a claustrophobic feel with Lawrence’s lovely home turning from a refuge to a prison – but the cast list on IMDB is immense with sex slaves, refugees, stragglers and looters. Though the list could be deliberately misleading I suppose, as that’s exactly the kind of thing I’d do if I was a major film director with nothing to do on a wet Sunday afternoon.

Anyway here’s the full trailer –  mother! is showing at the Venice Film Festival this September.