Vin Diesel is soldier Ray Garrison – brought back from the dead, enhanced with nanotechnology. What could possibly go wrong for evil scientist Guy Pearce, who can, and did, rebuild him?

“He’s unlike anything we’ve seen before, and he’s entirely in our control” intones Dr Emil Harting (Pearce), though something tells me Bloodshot won’t stay that way for long, once memories of his previous life, and his dead wife, start coming back.

And Garrison is not alone; Dr Harting has created an army of enhanced soldiers. 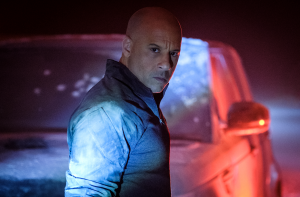 BLOODSHOT is from the producers of the Fast & Furious franchise, and I do like the trailer, especially the colours and the stuff going on inside his body (I am nosy like that though).

“Based on the bestselling comic book, Vin Diesel stars as Ray Garrison, a soldier recently killed in action and brought back to life as the superhero Bloodshot by the RST corporation. With an army of nanotechnology in his veins, he’s an unstoppable force – stronger than ever and able to heal instantly. But in controlling his body, the company has sway over his mind and memories, too. Now, Ray doesn’t know what’s real and what’s not – but he’s on a mission to find out.”

This is the second trailer – the first one, released last October, completely passed me by, though you can check it out on YouTube here if you haven’t seen it.

BLOODSHOT will open in cinemas across UK and Ireland on 13 March 2020. In addition to Diesel and Pearce (who will always be Mike-from-Neighbours to me), the film also stars Sam Heughan, Toby Kebbell, Talulah Riley, and Eiza González.

Directed by David SF Wilson, BLOODSHOT has a screenplay from Eric Heisserer, whose screenwriting credits include Bird Box and Arrival.