You are here: Home / Trailers / Life Far From Sweet In The Trailer for Mike Leigh’s True-Life Tale Peterloo 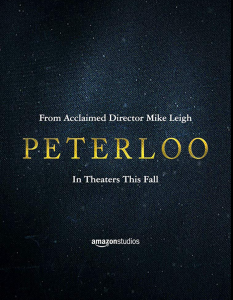 Director Mike Leigh’s film covers the true-life events that took place in St Peter’s Field, Manchester, in 1819. Radical orator Henry Hunt was speaking to a crowd of around 80,000 people, eager for democratic reform.

This is a short teaser, though it’s quite emotional as the crowd starts chanting “Liberty or Death! Liberty or Death!” while the cavalrymen in their gold-braided red jackets try to control jittery horses.

Leigh’s film stars Rory Kinnear as Hunt, and co stars Maxine Peake. It is released in the UK on 2 November and the US on 9 November.