You are here: Home / Trailers / Alien: Covenant – The Crew Are Having A Last Supper, Cue Gods & Monsters 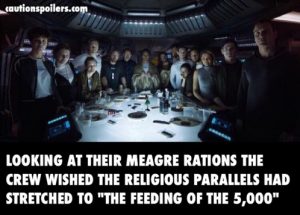 The religious parallels were everywhere in Prometheus. What were the Engineers but vengeful Old Testament Gods, creating then destroying at will? And now a 4-minute prologue to Alien: Covenant has just been released, directed by Luke Scott, entitled the Last Supper.

In Christianity the Last Supper is the last meal that Jesus and his Apostles shared, after his triumphant entry into Jerusalem and before his crucifixion a few days later.  (Truly, what a difference a week makes.) So it looks like now we are in the New Testament, where God becomes much nicer and more, well, liberal and progressive.

The crew of the terraforming spaceship Covenant are en route to a distant planet to begin the first colonisation – 10 years after the events of Prometheus and 20 before Ripley first meets the alien. They’re about to go into cryogenic sleep onboard. But before hand, they’ve got some drinking and eating to do. Well, once James Franco has gone to bed.

Katherine Waterston is terraforming expert Daniels and never have I seen an alien-fighting woman not called Ellen Ripley who reminds me so much of Ellen Ripley. Billy Crudup (so good in Jackie) is the ship’s captain, and Danny McBride the pilot. Plus loads of other crew members, so we can spend an enjoyable time guessing which order they’ll die in.

As they’re colonising, there are some couples among the crew, which should add some interesting “who do I save first” dilemmas once they meet the xenomorphs (when they’ll all die anyway).

Michael Fassbender II – another Android, this time called Walter – looks more human than Prometheus’s David (preppy, basically) and at the party he’s really the only sober one. As they enjoy themselves there are hints about the relationship fractures to come.  A married couple are already drunk. And clearly some people are more popular than others.

At their final meal Jesus predicts that he will be betrayed by one of the Apostles and gives Judas some bread to indicate that it is he who will betray Christ. There is a choking scene in the Covenant Last Supper, where a young female crew member is saved by Walter. Plus Franco looking suitably biblical wrapped in a blanket at the start who is betrayed by basically everyone as they wait for him to leave before tucking in.

Jesus also predicts that Peter, one of the Apostles, will deny knowing him three times. Which I can see happening as let’s face it, in most sci fi horror films you take one look at the characters and realise that for 80% of them – particularly James Franco – you would definitely do the “not with me mate!” shrug when meeting the aliens (I excuse from this most of the cast of Aliens who were a pretty cool bunch of badasses particularly Private Vasquez).

So there we have it. James Franco is the Messiah, which he probably thinks anyway. And at least at this Last Supper there are lots of women and that, folks, is PROGRESS.