You are here: Home / Trailers / Kingsman: The Golden Circle Trailer – I Hope You’re Ready… For What Comes Next… 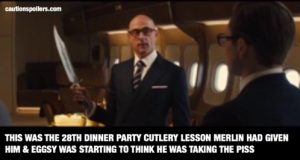 The first trailer is out for Kingsman: The Golden Circle is out and it’s a total blast in every sense.

The movie is a follow up to the 2014 hit Kingsman: The Secret Service which starred Taron Egerton and Colin Firth. The first film was a hilarious spy comedy about a private international intelligence agency founded in London after WW1 and followed Eggsy (Egerton) as he left his aimless life behind to follow in his late father’s footsteps as a trainee agent for Kingsman, supported by Colin Firth’s Harry Hart.

Again written by Jane Goldman and directed by Matthew Vaughn, Kingsman: The Golden Circle has returning stars Taron Egerton as Eggsy and Mark Strong as Merlin. New cast members include Julianne Moore as criminal mastermind Poppy, part of the Golden Circle; Jeff Bridges as Champ, the head of Statesman; Halle Berry as Statesman’s technology expert, and Channing Tatum as a Statesman secret agent.

And could that possibly be… Colin Firth as the supposedly dead Harry Hart?

Check out the Kingsman: The Golden Circle trailer below.