You are here: Home / Trailers / Jumanji: (Mostly) Welcome To The Jungle – Trailer 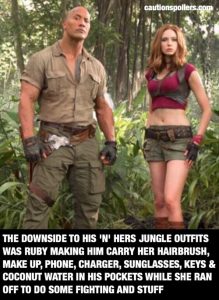 If you have ever heard of a better character name than Dr Smolder Bravestone, I want to know about it.

The original Jumanji starred Robin Williams and came out in 1995. I saw the first film but I don’t hold movies as untouchable classics (except Some Like It Hot, touch that at your peril, Hollywood) so remaking / rebooting / sequelling this film doesn’t bother me.

Jumanji: Welcome To The Jungle is more of a standalone sequel than a reboot, with four teens spending their school detention cleaning out the basement. They find an old Jumanji video game, pick their characters, then find themselves transported into the game where far more famous actors play their avatars.

And as they’ve only had the character names to go on when choosing their avatars, this is the basis of a lot of the jokes. So school nerd Spencer’s avatar, the aforementioned Dr Smolder, is played by Dwayne Johnson; Bethany the pretty, possibly mean girl chooses “curvy Shelly” who turns out to be a middle-aged overweight male professor, played by Jack Black; quirky Martha turns into high-kicking, micro-shorts wearing (of course) commando Ruby Roundhouse played by Karen Gillan; and school footballer Fridge turns into wise-cracking Moose, a weapons specialist played by Kevin Hart.

Check out the whole trailer below. The film looks very obvious with lots of explanation via dialogue (“I think we got sucked into Jumanji and we’ve become there avatars we chose!” explains Dr Smolder Bravestone, just in case we weren’t sure), and the jokes are signalled a mile off, but it also looks really great fun – in the main.

Though with my feminist hat on (which actually never comes off as then I’ll have awful hat-hair and what hot guy wants to see that?) I’m not thrilled about a teenager – Bethany – subject to all the usual looks-related pressures women and girls face, responding to them by making herself pretty and taking selfies, then being ridiculed when her avatar turns out to be an overweight bloke. Especially with fellow-avatar Ruby in her weeny shorts and crop top. Still, maybe it’ll turn out that the jungle is an allegory for patriarchy and they all escape.

Jumanji: Welcome To The Jungle is out in December 2017.