You are here: Home / Trailers / Indie home invasion thriller “Nefarious” gets a trailer and a world premiere 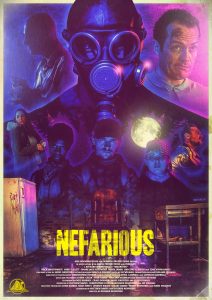 “Sometimes, you have to turn to crime. Sometimes, it turns on you…”

Check out the trailer for Nefarious, the new film from the makers of 2018’s successful indie folk horror Dogged.

“Darren, Lou, Jo and Mas live a meagre existence on the fringes of poverty. Indebted to the criminal kingpin of their social housing development, they routinely fear for their lives. On the other side of town, the already wealthy Marcus and his disabled brother Clive receive a windfall in the form of a winning lottery ticket. When their worlds collide following a botched robbery, the would-be criminals get more than they bargained for, and will be tested to their limits in a desperate attempt to survive a predator of monstrous proportions…”

It’s the second full length feature film from production company Ash Mountain Films, and promises to be a very different ride from their previous movie.

Nefarious was  shot over 16 days in late 2018 and was funded entirely by supporters of the project through crowdfunding platform Kickstarter.

The film will premiere at Buffalo Dreams Fantastic Film Festival in August, followed by a screening at the Austin Revolution Film Festival in early September, where the film has been nominated for awards in eight different categories. (Screening times and venues are available on the festival websites.)

You can read my review of Dogged here and my 2017 interview with Richard here.