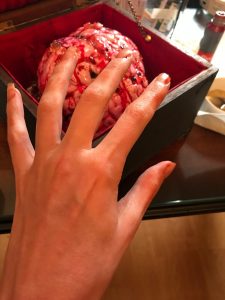 Creepy indie science fiction horror Nightlens has a trailer, and yes that is a brain in a box.

The film is about relationships, and how you can’t go back to how things were with someone if you haven’t explored what went wrong and why.

In the film, the shady Cerebrics agency reconstructs people’s memories to order; the idea is that they can then experience their memories and work through them. But it doesn’t work out the way that Blake, who has employed Cerebrics so he can get back with ex-girlfriend Kate, is expecting.

“Two troubled souls employ a mind-construct agency to repair the trauma in their relationship but, once within the construct, fall prey to their own demons.”

Look out for my interview with Zoe, who plays Kate and was also heavily involved in the film’s production, in a few weeks – in the meantime check out the trailer below, and scroll down for set images.

Watch the Nightlens trailer now and scroll down for images: