You are here: Home / Trailers / Homeless Ashes: crowdfunded film gets a trailer 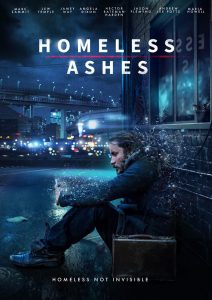 Directed by Marc Zammit, who also stars in the film, Homeless Ashes is the culmination of four year’s work and research and a £100,000 crowdfunding campaign.

Many of the characters and scenarios were adapted from true stories of homelessness relayed to Zammit during his research for the film: “Each person living homeless has a story and deserves to be heard,” he said.

“They are homeless but not invisible and I believe this film will connect with audiences worldwide. I met many homeless people, living on the streets of London whilst researching for this film and I dedicate it to them.”

Frankie (Hector Bateman-Harden) is a young boy who stands up to his fear and runs away from an abusive home only to grow-up trying to survive on the streets. After fleeing from his parents, he falls in with junkies including Viv and Ryan, makes honest friends in Gavin and Chico, meets others including veteran Al and immigrant Eva, and is reunited with childhood friend Nicole. But living on the streets takes it toll and not everyone survives the experience.

There’s no UK release date as yet but look out for the film at festivals.