You are here: Home / Trailers / Halloween Trailer: 40 Years On – Do You Still Believe In The Bogeyman? 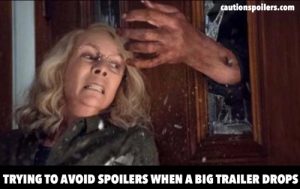 “You don’t believe in the bogeyman? You should” says Laurie Strode (Jamie Lee Curtis) ominously. And if I didn’t before this trailer, I sure as hell do now.

I LITERALLY jumped up from my seat at the babysitter-closet scene in this trailer, and as I’m an editor you can be sure I will always use literally, literally.

This is an update four decades on from that Halloween when Laurie escaped the murderous Michael Myers.

And what’s she been up to in the meantime? Practising her shooting skills (she looks like a wild-haired, middle-aged Sarah Connor, a look I am henceforth going to emulate). 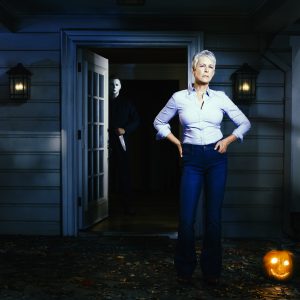 Oh and praying that Myers would escape so she could kill him. And she gets her wish. The first part anyway, I’m not sure about the second.

Laurie is now a gun-toting grandma hellbent on revenge, and clearly obsessed and damaged. Which I can completely understand as I felt like that after watching this trailer. Hold on Laurie, I’m coming!

It stars Jamie Lee Curtis reprising her role as Laurie Strode, Judy Greer as Karen Strode and Nick Castle as Michael Myers. David Gordon Green directs and it is produced by John Carpenter, director of the original Halloween from 1978.