You are here: Home / Trailers / Guess WhoDunit: The Murder On The Orient Express Trailer Is Here 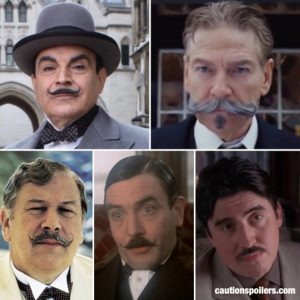 Kenneth Branagh in the new Murder On The Orient Express trailer, with his incredible facial hair looking like a home bikini wax where the poor woman gave up half way through because of the pain, just confirms my long-held belief that screen Poirots are all escapees from the children’s game “Guess Who?”

First of all please don’t moan about possible spoilers ahead as THIS BOOK WAS PUBLISHED IN 1934! Don’t worry, I won’t tell you much as I don’t know what changes are in the adaptation. But Johnny Depp plays Edward Ratchett, and he doesn’t appear in the trailer where Poirot is going through the suspects. In the book Samuel Ratchett is the murder victim so I am going to use powers of deduction almost as impressive as the famous little Belgian detective and state that Depp probably gets it pretty early on. (Rumours that it is carried out by someone unhappy at the dullness of Pirates Of The Caribbean 5 are unfounded.)

I used to love the Agatha Christie films with Peter Ustinov as Poirot – Evil Under The Sun in particular is fabulous. They have always had terrific sets and casts so I’m really looking forward to this. Plus my dad was the world’s biggest Agatha Christie fan so I can’t not watch this one really.

Check out the trailer below and let me know what you think in the comments.