You are here: Home / Trailers / Fishing For Jokes About The New CHiPS Trailer 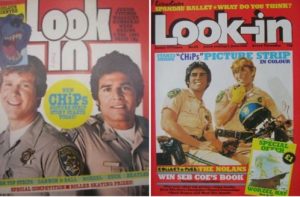 Any goodwill I might have had for the new CHiPS film is dissipating as it is such a pain typing CHiPS with the CAPS then no cap then CAPS.

CHiPS the movie stars Dax Shepard and Michael Pena. Shepard wrote and directed the film, and plays Officer Jon Baker, while Pena is Frank “Ponch” Poncherello. The two LA police officers are on highway patrol, but are soon involved with tracking down a vicious ex-cop (played by Vincent D’Onofrio) who has a team of henchmen stealing cars and creating mayhem in LA.

Anyway I’ve watched the trawler*, sorry trailer, for CHiPS the movie, and it is a mixture of cringeing at “I’m not gay!” gags while watching through your fingers, then involuntarily laughing really loudly as they ride their huge motorbikes between two traffic jams, taking off wing mirrors as they go. I suspect the funniest bits are all in the trailer but I really hope the film turns out to be a juvenile gagfest from start to finish. *another Brit fish and chips joke for you there, you’re welcome.

The tagline for CHiPS the movie is “CHiPS Happens”. Hmmm. Just think, if Americans used the correct word for chips they they could have had some much batter, sorry better, jokes there.

For people who are too young to remember CHiPS the first time around, who are, if you will, waiting for twice-cooked CHiPS now, the original CHiPS was a buddy cop comedy drama show that ran for six seasons from 1977 to 1983, with 139 episodes. Erik Estrada played Ponch and Larry Wilcox was Baker. They patrolled the LA highways together solving crimes and most episodes ended with an exciting but non-violent car chase.

The movie trailer premiered on Jimmy Kimmel Live this week. The Warner Bros film should be in cinemas on March 24 2017.