You are here: Home / Trailers / Dark Phoenix third and final trailer rises from the ashes 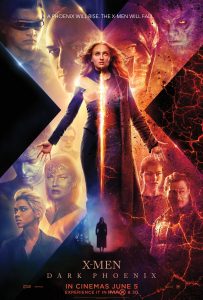 “When I lose control bad things happen. But it feels good.”

We’ve all felt like that, but put aside those memories of your first night out during Freshers’ Week, this is a little more serious.

The third and final Dark Phoenix trailer is here, and the film is also the last in the X-Men series.

Sophie Turner is Jean Grey aka Dark Phoenix, who is transformed during a space mission into something… else. As Jessica Chastain says, “the X-Men fear you and what they fear they seek to destroy”.

I’m no X-pert but I like the idea of a young woman consumed by her new power (though it feels messy).

“This is the story of one of the X-Men’s most beloved characters, Jean Grey, as she evolves into the iconic DARK PHOENIX. During a life-threatening rescue mission in space, Jean is hit by a cosmic force that transforms her into one of the most powerful mutants of all. Wrestling with this increasingly unstable power as well as her own personal demons, Jean spirals out of control, tearing the X-Men family apart and threatening to destroy the very fabric of our planet.

The film is the most intense and emotional X-Men movie ever made. It is the culmination of 20 years of X-Men movies, as the family of mutants that we’ve come to know and love must face their most devastating enemy yet – one of their own.”

You can watch Dark Phoenix on 5 June in the UK and 7 June in the US. The film is written and directed by Simon Kinberg, and also stars Jennifer Lawrence, James McAvoy, Michael Fassbender, Nicholas Hoult, Alexandra Shipp and Kodi Smit-McPhee.

Watch the third Dark Phoenix trailer below and scroll down for the previous two trailers: