You are here: Home / Trailers / Chucky’s Back & He’s Pissed Off At The Increasing Gender Split in Toys 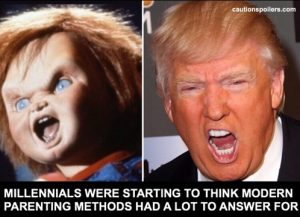 He’s not really. He’s Chucky and he just wants to kill you.

I am so old I can remember the original Child’s Play back in 1988 when Chucky was, well, just a kid. And he still hasn’t grown up, like an evil Peter Pan.

The latest Chucky film is Cult of Chucky and there’s a new trailer below. The new Chucky movie stars Jennifer Tilly, Andy Barclay and Fiona Dourif.

In the new film Nica (Dourif) is in an asylum and believes she murdered her family, rather than Chucky being the culprit. Her psychiatrist decides to use a doll to help with therapy sessions and yes you’ve guessed it, it’s not a Cabbage Patch Kid (though frankly however terrifying Chucky is, that might be scarier).