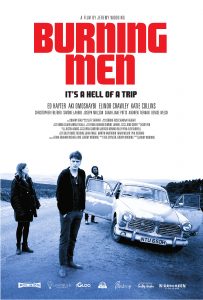 When two down-on-their-luck musicians are evicted from their London squat, they decide to head to Memphis to fulfil their musical destiny.

Selling their vinyl collection to raise the necessary cash, they end up stealing a very rare black metal record from a London record fair, then head north to sell it.

Can a record unleash forces of pure evil? No I’m not talking about Jedward.

Picking up a hitchhiker, Susie, on the way, they start to realise the stolen disc may be harbouring dark forces…

It’s filmed mainly in POV (point-of-view) and the trailer looks intriguing – a British indie road movie with shades of folk horror as they head through the flat wetlands of Lincolnshire and up to the Angel of the North.

The film stars Ed Hayter as Ray and Aki Omoshaybi as Don, the two musicians; with Elinor Crawley as Susie. Directed by Jeremy Wooding from a script by Neil Spencer and Wooding, the movie hits selected UK cinemas on 1 March.

The score is by Justin Adams – he’s worked with Robert Plant for years and this is his first film score.

Check out the trailer below.