You are here: Home / Trailers / Blockers Trailer: Enemas and Eggplants 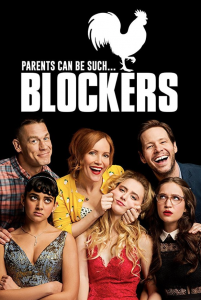 After doing as much in-depth research as I could bear, I discovered that the title of this movie is a reference to clock blocking. So then I had to do even more in depth research to find out what cockblocking is (no I don’t know how I ended up with two children either. Up until now I’d assumed I’d got them from Waitrose).

So basically I checked out IMDB, then I delved into the Urban Dictionary. And a cockblocker is someone who prevents a man from having sex with a woman. Yes I know you all know this but I didn’t. I do now though!

Three teenage friends are off to their school prom, determined to lose their virginity (virginities?) that night. But three of their parents are soon on the case, determined to crash the prom and prevent any shenanigans.

Oh. My. Lord. I really hope they haven’t put their best gags in the trailer. Though there are a couple of good ones. I like the parental attempts at translating the emoji messages they find, and their delight at what one means followed by shock at what one means: “All emojis have secret meanings!” followed by “…eggplants are dicks!” (And sorry but while I may not have known what cockblocking was, I do know it’s not eggplant it’s AUBERGINE).

Anyway one of the dads is given a beer enema, and all I can say is if you have prom-age children, please make sure you put your kitchen funnel through the dishwasher before using it for jam-making.

This is a trailer that’s loud, raucous, and rude, and I’m hoping that the shouting isn’t simply a way to cover a thin script.