You are here: Home / Trailers / Black Panther Teaser Trailer – A Superhero To Die For With A Costume To Match 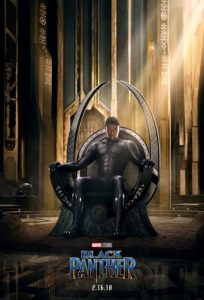 Chadwick Boseman is Black Panther / T’Challa, in the film from Marvel Studios, directed by Ryan Coogler, and due out in early 2018.

I finally got a chance to check out the new Black Panther teaser trailer, and it looks incredible (don’t shout at me – I still haven’t watched the Thor: Ragnarok trailer as it came out during the school holidays and we were immersed in the Diary Of A Wimpy Kid film. God knows what I’ll miss when the Emoji Movie turns up during the summer break. I’m not going to be allowed to watch anything else if there’s a film out starring a talking poo).

The character has already appeared in Captain America: Civil War, and in this movie T’Challa is returning to his homeland, Wakanda – to take up the reigns of Kingship now his father is dead. Wakanda is highly technologically advanced because of its access to the super-strong, super-light metal Vibranium. The kingdom, and T’Challa, are protected by the Dora Milaje, an all-female special forces. But as often happens when a king dies, succession is not necessarily smooth and there are always usurpers to the Throne.

I’m not a superhero expert as I don’t read comics, so there’s probably a lot in it that has passed me by, but the trailer is exciting and stunning to look at. (I do watch superhero films and enjoy them if they are good movies anyway – though it’s often without any back history or particular knowledge of a character. This does mean I get to mostly avoid Twitter superhero spats. And once it gets to review time, if I can work out what is going on then anyone can.)

Watching the trailer is a reminder how rare it still is to see a big budget feature with so many black actors in it, and particularly so many women of colour who look strong, powerful and beautiful, especially in full-on protection mode.

The scene with the Wakandans dancing on ledges all the way up the high cliffs while the craft circles below is incredible, and I love Black Panther’s Vibranium costume which I don’t always say about superhero outfits (I’ve watched several Batman films where I can’t help but want the heroine to say, yes, even in the good ones with Christian Bale: “I’m standing in front of a man, dressed as a bat, asking him to, er, squeak. I mean love me. I mean save the world.”)

Check out the Black Panther teaser trailer below. The film is due to be released in February 2018.