You are here: Home / Trailers / Come Back, It’s Not About Bingo! Check Out The New Bingo: The King Of The Mornings Trailer 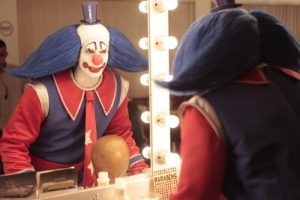 Come on, you can never have too many clowns in films (says the grown woman still wibbling behind the sofa after watching IT). And this one has a cool colour scheme and doesn’t look like an undead Elizabeth I.

The show is a huge hit and the children love him, but he’s not allowed to tell anyone that he is the person behind the make up and wig.

How can he enjoy his new found fame when no one knows it’s him? Meanwhile his son Gabriel finds his father growing more distant as his fame increases. It’s a surreal and funny tale though not actually for children – with a 15 certificate in the UK.

This is the long-awaited directoral debut from Oscar nominated and BAFTA-winning film editor Daniel Rezende, and has also been chosen as Brazil’s BAFTA and Oscar entries.

Bingo: King Of The Mornings is released in the UK on 15 December 2017.