You are here: Home / Trailers / Atomic Blonde Is Jane Wick But Posh & English 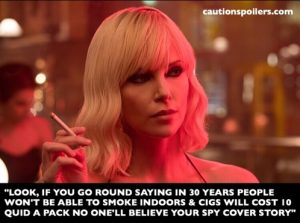 You’d better watch the (restricted) trailer for Atomic Blonde here as currently if you google you get Blondie by Atomic, which I now can’t stop singing.

Charlize Theron is a gun-toting, face-smashing British spy called Lorraine Broughton and she almost certainly trained at the same Kick Ass Ladies College as Miss Perkins in John Wick (sadly Miss Perkins then went to the Dark Side, in every sense).

The film is set in 1989 with the Berlin Wall about to come down, and co-stars James McAvoy and John Goodman, and of course Toby Jones who is basically the World War 2 / spy film equivalent of Hugh Bonneville appearing in anything requiring a well-starched dress shirt.

There’s a plot about a ruthless spy ring that Lorraine and her spy colleague David Percival (McAvoy) have to smash, though in the trailer it’s all about sex and beating the shit out of people.

The action scenes in the trailer are fabulous but I’m not convinced anyone who isn’t British can actually swear like a Brit, even if they put on a British accent.

Atomic Blonde is directed by David Leitch who co-directed John Wick with Chad Stahelski. The trailer (see below) is epic but then any heroine with a blonde bob and a fringe is a hit with me.