You are here: Home / Trailers / Another Replicas Trailer! It’s Almost Like They’re… 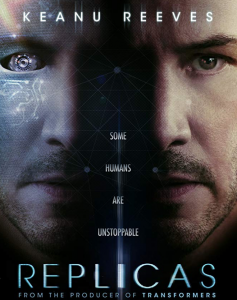 Check out all three trailers, and a Replicas press junket interview, below (not with me. No, I don’t know why they didn’t ask me either)

Cloning drama Replicas is coming back to life after hanging around like Schrodinger’s Movie for what seems like years.

He’s brought her back, because her loves her he says, and not because she’s the only one who knows the Netflix password, or he couldn’t work out how to use the dishwasher.

It’s out in the US next week – though no UK release date as yet which is something they need to sort out ASAP as I’ve been waiting since the first trailer came out in SUMMER 2017 – and there’s now a third trailer! (See all three below.) Still, I’m never going to complain about too much Keanu Reeves, am I.

The teaser we got last September was pitching Will (Reeves) as Mad Scientist Will – this new one has Family Man Will, trying to defend his decision to his wife, who’s just discovered she and their children died in a car accident.

I’m hoping Replicas will turn out to be the brisk, jarring, slightly batshit thriller the trailers are promising – and it’s always interesting in sci fi to see how they explain scientific concepts that don’t make sense but have to sound like they do.

Unlike the previous two trailers, this one doesn’t include the line “but what if something horrible goes wrong!”, a great example of a sentence going horribly wrong. Though it’s now so deeply imprinted on my brain that I’m going to be waiting for it throughout the movie, like when you go and see Hamlet and you don’t actually want to hear “to be or not to be”, but you can’t rest until you have.


I’ve put all three trailers/teasers below, the most recent one first. I know, I spoil you lot.