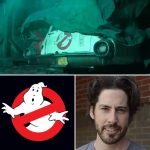 Actually it was fewer calls and more tweets when the world found out on Tuesday that there’s to be a new Ghostbusters sequel. Jason Reitman, son of original Ghostbusters director Ivan Reitman, announced he’d been secretly working on the new film – and then a few hours later a little teaser trailer arrived. This new Ghostbusters is… END_OF_DOCUMENT_TOKEN_TO_BE_REPLACED