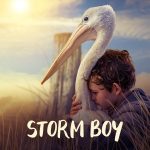 Geoffrey Rush is the adult Michael Kingley, reminiscing about growing up on the beach in an empty Southern Australia where he raised a brood of tiny pelicans that had lost their mum. Jai Courtney plays Michael’s reclusive father, Hideaway Tom, with Trevor Jamieson, one of Australia’s foremost indigenous actors, as Fingerbone Bill – who helps… END_OF_DOCUMENT_TOKEN_TO_BE_REPLACED