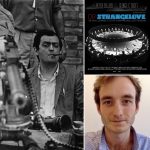 “Kubrick says it in the film, it’s an abstraction and people don’t process it. How do you deal with the idea that the world could end?” Matt Wells has just made his second short film about Stanley Kubrick: Stanley Kubrick Considers The Bomb. You can see it in cinemas with the new 4k restoration of Dr Strangelove or:… END_OF_DOCUMENT_TOKEN_TO_BE_REPLACED