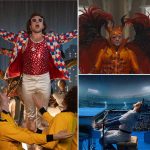 “”When I do a show… 20 minutes before I go on I choose my outfit. And until then I don’t become Elton John.” Elton John on “true fantasy” Rocketman (check out my 4.5/5 review here.) Julian Day was the costume designer for Rocketman, and unsurprisingly the outfits were an integral part of the film. The… END_OF_DOCUMENT_TOKEN_TO_BE_REPLACED

Let’s face it, without props films would just be naked people in a room with no furniture and no carpets. Actually that probably is a film already, but it’ll be Danish with subtitles and probably won an award from some made-up festival somewhere. But we need at least one “Best of 2016” list that doesn’t have… END_OF_DOCUMENT_TOKEN_TO_BE_REPLACED