You are here: Home / Lookalikes / Actors With Even Longer Careers Than Kevin Bacon 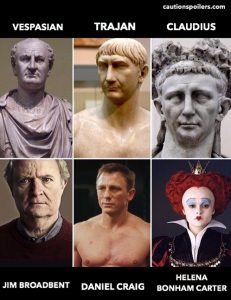 Sometimes I look at a Hollywood actor and I think “dear god you’ve been around since FOREVER!”. Well you know what, it seems some of them really have.

Back in the mists of time, in Ancient Rome, some politicians needed new publicity statues and went for a carving. Several weeks later they emerged, covered in chippings, with their new effigies.

Many centuries on, it dawned on these same politicians that spouting rubbish written by someone else while looking incredibly sincere was the perfect skill for becoming an ACTOR.

The nasty ones also soon realised that by changing their tone of voice when saying “I WILL find you” from menacing (at one’s political enemies) to heartfelt and steadfast (at cute children and puppies), they could get a job in every single Hollywood disaster movie ever made.

So ladies and gentlemen, I give you… THE IMMORTALS!