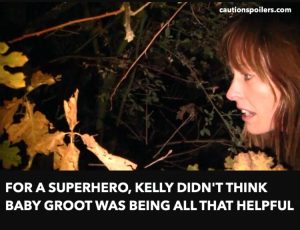 Apparently director Bobcat Goldthwait called this film The Blair-Squatch Project which is reason enough to watch in my book. As is being directed by Bobcat Goldthwait, a name that demands attention. (If like me you’re a 1970s Sarah and you know the pain of being one of FIVE Sarahs in your class at school, with a couple of extra Saras thrown in for good measure, you’ll understand how exciting a name like Bobcat is to me.)

Willow Creek is a found-footage Bigfoot horror film (don’t you ever wonder about all the unfound horror footage out there? All those disembowellments and demonic possessions and mythical creatures and we’ll never know, because the footage remains resolutely unfound.) Horror found-footage has been done to death (see what I did there) but executed (see what I did there pt2) well it can still be incredibly effective. And it’s almost certainly much harder then it looks to get right.

Jim and Kelly are making their own documentary about Bigfoot, which means a weekend spent hiking and camping in the Six Rivers National Forest in California. This is where the famous footage of Bigfoot was captured in the Patterson-Gimlin footage taken in 1967. This is real footage, of an alleged ape-like creature wandering along a riverbed, but people have been arguing over whether it’s a man in a comedy gorilla suit or a lost species of primate with really big feet for 50 years now.

Jim is Bigfoot-obsessed – his girlfriend Kelly, sassy and the very definition of cheerily long-suffering, doesn’t believe in any of it but clearly loves Jim and is happy to indulge his obsession and come along with him, helping him with his filming en route. Their relationship is genuinely touching and the backbone of the story – they do come across as a believable couple and are clearly having great fun along the way. The fun continues when they get to the titular Willow Creek, a small town which is home to the Bigfoot myth and indeed an annual Bigfoot Festival. The locals are well used to Bigfoot obsessives like Jim. They have their patter off, well, pat, including the obligatory “keep out of the woods!” warning. Willow Creek needs Bigfoot as much as it is frightened by the many myths and stories its inhabitants recount. Not everyone believes, of course, but balanced against the non believers and the if-we-build-a-bigfoot-museum-they-will-come brigade, there are genuinely hostile locals and the subduing effect of the posters of a missing local woman.

At times the couple, while very likeable, are a bit too mocking of the small town, something they’ll come to regret. However soon they’re on their way into the woods, to find the footage location. Their journey into the forest down an increasingly broken track takes a couple of hours which shows the vastness of the American woods. (Here in the UK our myths and legends are smaller scale. Any tourist location would have a little car park with toilets and a shop selling vampire shaped soap or werewolf tea towels, and would probably be run by the National Trust.)

As they near their destination, Jim and Kelly have one more run-in with locals, the most hostile to date (“This is your last chance to Get the Hell Out of (sas)Squatch” I shrieked at Kelly, though of course she couldn’t hear me as this film was made in 2013 and it’s now three years later). So like all good horror film characters they ignore it and carry on their way.  Soon the situation becomes even more unsettling as their campsite is trashed. Animals? local boys? Bigfoot? It’s unnerving despite Jim’s attempt to make light of the situation.

That night in their tent they are disturbed by strange noises, rustling and even stones being thrown at their tent. This scene is nearly 20 minutes long and was filmed in one take, and is really effective at showing the couple’s increasing fear as the noises get nearer and more aggressive in intent. They decide to leave at dawn the next day, but that’s not as easy as it looks.

As with many horror films, there were several “Turn around and drive home and make a documentary about your cat!” mental shrieks from both me and Kelly but no, they kept going, towards their badly filmed, wobbly doom. The lost-in-the-woods section is particularly effective as you would think that daylight would bring some respite from the noises, but the fear keeps on being ratcheted up – does Bigfoot ever sleep?

This is one of those films that really caught my imagination, to the extent that for a few days afterwards I was OBSESSED with Bigfoot, rewatching the film, googling North American sightings and scouring forums. I was on the point of believing it existed until I watched a different film and got obsessed with that for a while, and that was the end of Bigfoot for me. Now I don’t even care about Bigfoot. Bigfoot who? I say, when accosted by a large apelike creature in the woods, banging two bits of wood together and trying to get me to marry it.

There have been plenty of found-footage horrors set in the great outdoors, and I imagine in part that’s because they utilise that fact that low costs mean a character can realistically film their “day out in the woods”, while at the same time they are in situations where it’s believable that those same technological escape routes, i.e. smartphones, could easily stop working. Mythical creatures by definition remain mythical by hiding away in sparsely populated and lonely places, and at least in these woods it’s likely the cell phone signal would be terrible or non existent (in the UK, mobile phone coverage is still so patchy in some areas, it would actually be possible – if we had a Bigfoot, rather than no native animals scarier than an adder – to be mauled by it while only five minutes’ walk from the nearest Waitrose).

Willow Creek is an effective film considering its low budget. The relationship between Jim and Kelly feels very realistic – she’s supportive of him fulfilling his dream when she could have easily stayed at home and drunk wine with her girlfriends, he needs her with him because he loves her and they’re a team. They joke together, film together, and then stick together even towards the end when it dawns on them what an awful situation he’s got her in to.

rent / buy willow creek on vod or buy on dvd or blu-ray from amazon.com

Watch the trailer for Willow Creek: