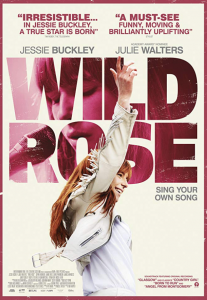 Director Tom Harper gets us to that dream via a cracking script from Nicole Taylor and a barnstorming and profoundly moving performance from Jessie Buckley as the fresh-out-of-jail country singer Rose-Lynn. With two children by the time she was 18, she now has to find a way to be true to her talent and be a mother to her children.

I saw Wild Rose on Mother’s Day. Its three main characters are all women, all very different, all flawed, but ultimately trying to do their best, particularly as mothers. (The other star of the film is Glasgow itself, with Rose-Lynn’s existence so intricately woven into her home city that one of the biggest barriers she has to overcome is believing that she can’t be a country singer and be from Glasgow.)

Rose-Lynn, in her white cowboy boots and white fake leather jacket, fringes cascading down each arm, bounds out of prison, her fellow inmates waving her off with the proclamation that “you’re gonna be the next Dolly Parton!”

Soon she’s having bouncy sex with her boyfriend on the grass outside a block of flats, and collecting her two primary school-age children (Lyle and Wynnona, country names to a T) from her very disparaging mother, Marion.

Marion (Julie Walters) wants her to step up to motherhood and put her dreams away. Rose-Lynn is determined to make it to Nashville, even if first she has to persuade a judge to remove her electronic tag (there aren’t many gigs in Glasgow that finish before her 7pm curfew).

But Rose-Lynn is her own worst enemy. Trying to get her old singing slot back at Glasgow’s Grand Ole Opry, she smacks her replacement when he tells her that no one wants to see a convicted criminal on-stage. “Johnny Cash is a convicted criminal ya bawbag!” she yells before being barred.

A new job as a cleaner for the upmarket Susannah (Sophie Okonedo) could be a new start. The metropolitan Susannah lives in what looks like a miniature castle with her Glaswegian husband and two lovely children, and quickly sees in Rose-Lynn someone she can help.

And Okonedo does middle-class bulldozer (if that isn’t tautology) to perfection: from Susannah’s decision that her cleaning staff are her friends because she doesn’t know how to treat people she employs; to the altruistic feeling she gets from making Rose her project; to her picking and choosing who to bestow her help on (Marion pointedly comments that Susannah did nothing to help her previous cleaner, a friend of Marion’s, with her health problems).

Okonedo is fabulous, with a quiet magnetism as the good-hearted but damaging fairy godmother with nothing at stake, keen to aleviate her own boredom. She’s never eclipsed in any scene with Buckley’s raw, throaty heroine but neither does she take over.

Susannah is clueless because she’s never had to be clued-up, and never sees further than the Rose-Lynn standing before her in her own house. It never occurs to her to ask if Rose-Lynn has children, she just assumes she doesn’t.

She does, though, manage to arrange for Rose-Lynn to meet BBC Radio 2 DJ Bob Harris, thanks to her friends of friends of friends. It’s Harris’s few lines of dialogue that do more to help Rose-Lynn find her dream than anything else. Write your own material about your own story, he tells her. It’s a bit of a twist on the country music tattoo Rose-Lynn has on her arm: “three chords and the truth”.

Rose-Lynn’s situation is one that will resonate with plenty of mothers. When Susannah decides Rose-Lynn needs to rehearse for a potential breakthrough gig, she’s forced to palm off her children on any friend who’ll take them because it’s the half-term holidays. It’s a common scenario for women, trying to care for their children while building a future, desperate to balance the eternal equation – children missing out now vs future time together and a secure life.

The relationship between Rose-Lynn and her mother is fraught. There’s a lovely moment, though, that sums up the different journeys which ultimately bring them to the same place. Marion admits that Lyle has declared his mum’s mince and tatties better than his gran’s: “Ma mince is your mince” laughs Rose-Lynn to her mother.

There are many other little gems dotted throughout the film. Rose-Lynn singing at Susannah’s desk, making a recording to be emailed to the BBC, the sunbeams breaking around her face as her truly transformative singing takes us and her into someone else’s story. Her white-haired solicitor, after Rose-Lynn has sat in his office blaming everyone but herself, standing up in court to declare of his client that “a more contrite young woman it would be hard to find” and requesting her electronic tag be removed. And the trip to Nashville, different sounds floating out from a thousand country music bars, fighting for attention with street performers under garish street lights, the pavements thronged with people.

It’s slightly spoilery to say she does get to Nashville (though it’s briefly in the trailer, below), but her trip surprised me in many ways.

The home of country music is a city stuffed with Rose-Lynns, all looking for that chance to sing and make an impression on some passing starmaker – a trajectory they think is both original and achievable, but to the jaded locals is anything but. It’s an impressive achievement that this section avoids both sentimentality and cynicism.

It’s hard to end a story like Wild Rose in a way that works – letting them either glimpse or achieve success can look trite, ending on a glum note may be realistic but who wants a rags to rags story? Taylor’s script does a sterling job though, and Rose-Lynn’s ending to one phase of her life manages to be both heartstring-tugging (I did cry!), fun, and genuinely inspiring.

Wild Rose is a fabulously entertaining, funny and affecting movie, accomplished filmmaking that is still raw when it needs to be. Central to its success is the extraordinary Buckley – perfectly encapsulating a scrappy fighter with a voice that comes from her heart and her home.