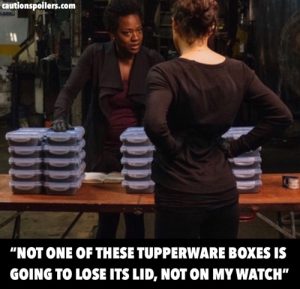 Widows is a bold and blazing movie that positions complicated women firmly at the centre, yet still finds time for little scenes which deal with the complexities of grief, the numbness and the desperation for physical contact, even when a dead husband has been a vicious waste of space. (How often is a death or violent crime used only as a plot device, with no understanding of how it will influence behaviour?)

And while at times it looks as if it’ll be a familiar tale, stereotypes are turned upside down, and nearly everyone is complicated or just not what you think they’ll be.

’Say hello to your new boss, same as your old boss’ could be the theme of Chicago politics, as the corrupt Jamal Manning (Brian Tyree Henry), backed up by his vicious brother Jatemme (Daniel Kaluuya), moves up the opinion polls, campaigning to be elected Alderman of the 18th Ward.

Jamal is up against the corrupt Jack Mulligan, whose family has held the seat for decades. Jack’s racist father Tom (Robert Duvall) is corrupt in the old style – kickbacks everywhere, metaphorical messes that his son complains he has to avoid stepping in everywhere he goes.

Jack claims to dream of a different life, all the while using a programme designed to empower black women in business as a front for his backhanders, extortion and dodgy deals.

Thankfully first-time robber Veronica Rawlings (Viola Davis) – though she tells her group of similarly green criminals that they have to be like men – is actually a completely different kind of boss.

Unlike Jack Mulligan, Veronica genuinely doesn’t want to be where she is, and doesn’t have much choice – though her situation does eventually deliver a form of closure for her too, old scores settled that at the start she doesn’t even know exist.

Her husband Harry (Liam Neeson) has just died in a white-van fireball along with his fellow thieves, while stealing $2 million of Jamal’s money; and the would-be Alderman gives Veronica only a month to repay it or suffer the consequences (repeated scenes of Jatemme’s brutality make it clear what failure would mean).

None of the men have left any provision, leaving their wives and children penniless – a good inversion of the usual “but he loved his family!” gangster trope. The women own nothing and owe a fortune.

Luckily Veronica has been left one thing by Harry – a notebook where he has meticulously detailed every past job, plus one upcoming heist worth $5 million that he never had a chance to carry out.

Grief, combined with decades of refusing to face up to what Harry did for a living, leaves Veronica aloof with the other widows when they finally meet and she tells them her plans for them to carry out the robbery.

The only mothering she wants to do is look after her fluffy white dog; but the inexperienced widows, dipping toes into a world where they don’t belong, force her into a form of helicopter parenting when she wants to be the hands-off kind. It takes an age for the other women to appreciate the high stakes nature of their life and death situation.

Lynda La Plante’s early 80s British TV series, on which Steve McQueen’s new film is based, was about four working class women. In this clever, twisty and brutal update the women are from very different backgrounds, and the story (by McQueen and Gillian Flynn) also weaves numerous threads about class, race, power and sex into the tangled morass of politics and crime. Early on we see Veronica and Harry lying in bed in the morning kissing, before a flash forward to his final disastrous robbery; this marriage between a black woman and a white man seemingly un-commented on, until later in the film when flashbacks show how race has affected their relationship and their lives.

The title is witty, ironically positioning the three women only in relation to their dead husbands: men who turn out to have been far less clever than their wives, a group of women who by the end can turn on a sixpence as circumstances change; men with no thought for their families’ welfare, families which will, if the women succeed, have lives of comfort and opportunity.

It turns out to be tall, willowy Alice (Elizabeth Debicki) – whose late husband beat her and whose mother signs her up to a sugar daddy website – who takes to the criminal life most easily, discovering a talent for play-acting.

Linda (Michelle Rodriguez) with two children at home, tries to complete her seemingly-impossible tasks (they have to be cleverer than they are right now, says Veronica) but she’s still grief-stricken. She’s also broke, her store selling quinceañera* dresses ripped from her when it turns out her husband gambled the rent money.

It’s Linda who brings in getaway driver Belle (a superb Cynthia Erivo) – the only one without a dead gangster husband and with her own gun. Physically fit and mentally driven, Belle is the final piece of the jigsaw, a single mum with several jobs who understands from the off what’s required and her own worth.

The robbery itself is well-planned (I joke about dying under a landslide of boxes and clicky lids when I open my Tupperware cupboard; at Veronica’s you probably really would); and panicky.

Despite it taking a good chunk of the film before the women even get together, the movie never drags, and there’s a twist that blew me away. And while there are a couple of instances that feel contrived, they are noticeable because they are so few.

This is an ensemble piece of pitch-perfect performances (my definition of ensemble is when I can’t find a suitable cut-off point when adding names into the Actors field, and this one could have gone on for ever). Farrell is riveting as slithery Jack Mulligan, all-knowing and all-deceiving, a crooked son sparring with his crooked father. And Kaluuya is terrifyingly blank-eyed and dark-souled as Jamal’s calmly violent brother.

But it’s Viola Davis’s film, compellingly watchable as Veronica goes on a journey from pretending not to know, to knowing too much – suppressing her fears because there’s only one way out. Veronica’s outfits don’t change as she metamorphoses from wealthy retired wife to heist-planner, but the black pants, cream shirts and well-cut jackets come to mean something different; a scared but determined woman who means business, fine-tuning plans and staring down the danger.

As Tom Mulligan says, after decades atop Chicago politics, survival is all.

* I originally called these princess, make-believe type dresses. Thank you Carlotta – in the comments – for letting me know that these were in fact quinceañera dresses, worn by Latin American girls for their Quinceañera celebrations when they turn 15 (a coming of age celebration marking their transition rom girlhood to womanhood).